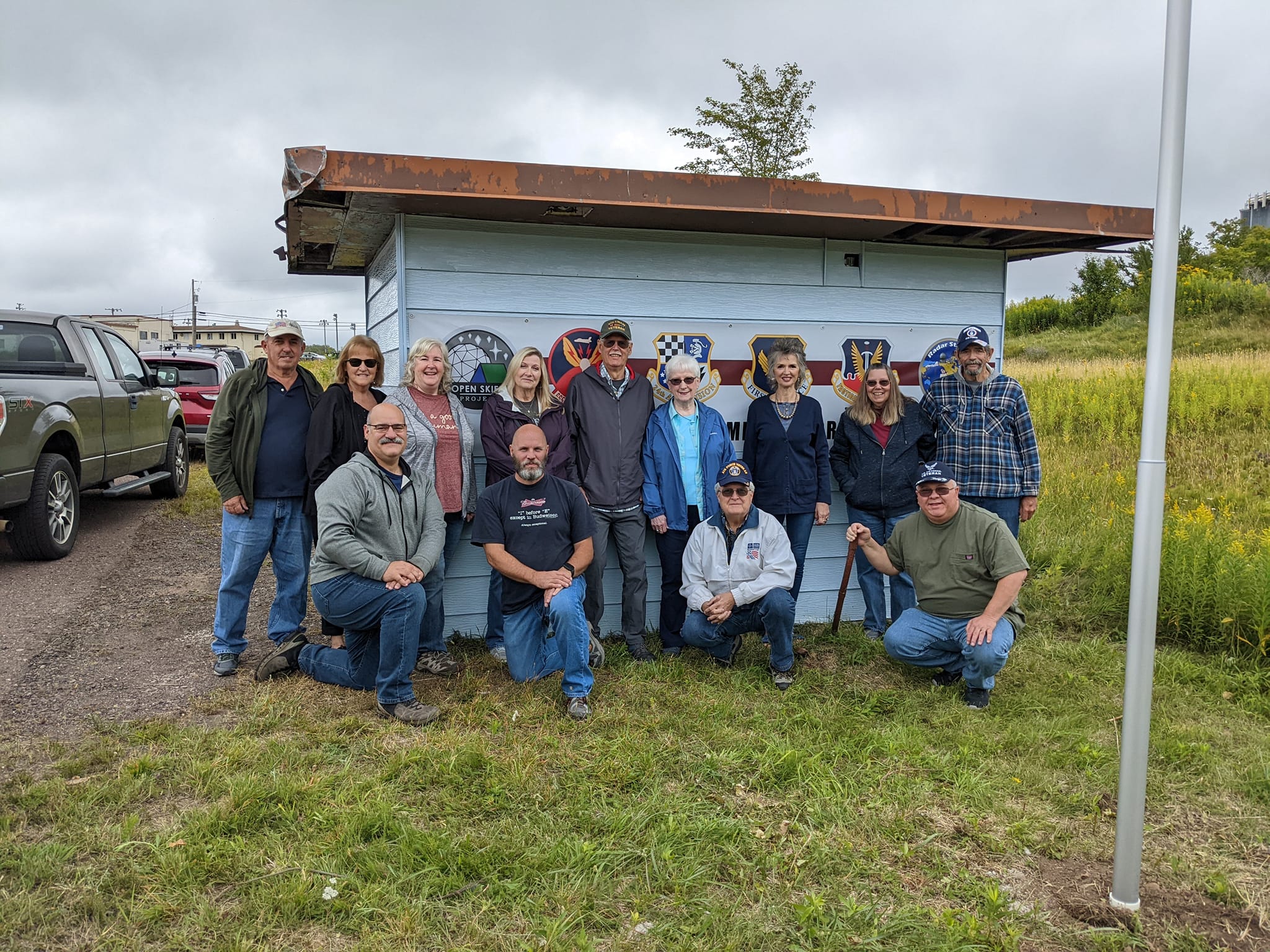 On Saturday, August 13 we had the honor of hosting a small group of Air Force veterans, civilians, and their families as they returned to the Calumet Air Force Station for their biennial reunion. The radar station officially closed down 34 years ago on September 30, 1988 and the 665th Radar Squadron was disbanded. Most of the active duty personnel were transferred to other locations around the world. Some who had retired moved away from the area, but a number who had either grown up nearby or had fallen in love with Michigan's Upper Peninsula continued to live near the radar station. A large number of those who had moved away would frequently return to visit the Keweenaw as well, and in 1995 they organized the first official reunion. The reunion was held at the Bicentennial Arena (now the George Gipp Arena) in Laurium, MI and had around 230 personnel in attendance!
‍

The 2022 reunion was a bit smaller of an event with only about 25 people in attendance, including several of us from Open Skies. But it was an incredible opportunity to get to speak with the veterans and civilians who had lived at the radar station and hear their stories! The reunion was all planned out by 665th Radar Squadron veteran Barry Thornbury and the weekend was filled with events, starting with a meet-and-greet and dinner at the Michigan House Cafe and Red Jacket Brewing Company in Calumet. We stopped by to meet everyone and give a short presentation on our plans for the Calumet Air Force Station. The following morning, the group stopped by to tour the base and talk with us. The personnel in attendance represented every decade the station was in operation from the 1950s through the 1980s. They also represented a wide variety of occupations at the radar station including: a cook from the mess hall, an operator at the powerhouse, radar technicians from both the height finding radar and search radar towers, a radio technician from the GATR site, and a Michigan Bell telephone/radio operator from the telecommunications building at the station. Some of them came with their wives or children. One woman came in honor of her father who had served at the station but had since passed away. Some of them brought photo albums from their time at the station, another brought several pieces of memorabilia that he very graciously donated to the future Calumet Air Force Station Museum (more on this in an upcoming story). We spent over two hours walking around the station listening to the stories about their service, the history of the station, and their lives at the base. We tried to record everything we could and we have hours of audio and video to sort through. We also are really hoping to sit down for more in depth interviews with some of the veterans soon.

Unfortunately, their time at the station was limited and they needed to continue on with their schedule for the day. After they gathered for lunch at the Mariner North in Copper Harbor, we all met up again at the historic Calumet Theater for a private showing of Dr. Strangelove or: How I Learned to Stop Worrying and Love the Bomb, a classic Cold War movie. It was really cool to sit and watch this movie with the veterans who had lived and served during the height of the Cold War, and the Calumet Theater is absolutely beautiful. If you are ever in the area, please stop and take a tour! Special thanks to Dan Jamison for inviting us all to the theater and showing the movie for us!

After the movie, the veterans all gathered for supper at The Hut Inn in Calumet for the final night of the reunion. In the morning they would all head home. For some this was just down the road to towns like Laurium or Copper City, but for others it was as far away as New Orleans, LA. Plans are already underway for the next reunion in 2024, which will be hosted at the National Air Defense Radar Museum in Bellefontaine, Ohio and the National Museum of the United States Air Force at Wright-Patterson AFB. We're looking forward to it returning to the Calumet Air Force Station in 2026!

If you are a veteran of the 665th Radar Squadron, were ever stationed at the Calumet Air Force Station, or had family who were ever there, please reach out to Barry and the other veterans through their Calumet Air Force Station Alumni Facebook page. If you don't have Facebook, please send us a message through our contact page on this site and we will make sure to get you in touch with them! We'd love to see even more people at the next reunion! We are also very interested in talking to you and hearing your stories. If you have any stories or photos to share with us, please use that contact page as well and we will get back to you right away!