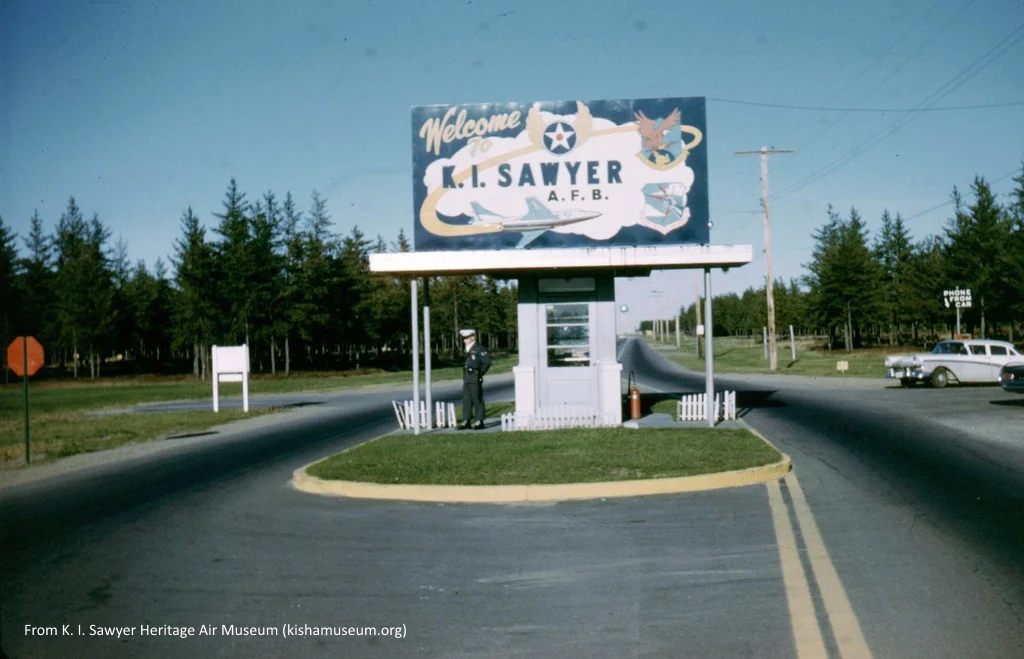 The history of the Calumet Air Force Station would not be complete without a look into the history of the K. I. Sawyer Air Force Base in Marquette County. Its history is closely tied with that of our radar station as both served vital roles in the air defense of the Great Lakes region. K. I. Sawyer AFB housed computer network that processed the data from the radar site at Calumet AFS, the interceptor aircraft that would respond to threats identified by the radars, and the nuclear bombers that would respond in the event of nuclear war with the Soviet Union. K. I. Sawyer also served as a sort of "parent" base for Calumet AFS, with most supplies and equipment for the station trucked in from there.

K. I. Sawyer was originally designed as a small commercial airport to support the growing population of Marquette County thanks to the expanding mining industry in the area. The idea for the airport was developed by Kenneth Ingalls Sawyer, a civil engineer and County road commissioner from Marquette. When the airport was completed in 1944, it was named in his honor. The airport was acquired by the US Air Force in 1955 for use by the Air Defense Command and Strategic Air Command. Construction of a 12,366-foot (2.3 mile) long runway, hangars, barracks, and support buildings were all completed by 1959, and the base officially opened on May 8 of that year. At its height, the base and surrounding area housed 12,000 residents, making it the second largest city in the Upper Peninsula.

In 1958, the Air Force established the Sault Sainte Marie Air Defense Sector which covered the entire Upper Peninsula, most of Wisconsin, and parts of northern Michigan. K. I. Sawyer served as the command and control station for this sector, and in 1959 became a SAGE Direction Center. The Semi-Automatic Ground Environment (SAGE) was a newly developed system of computers and data networks that would process the data from multiple outlying radar stations and compile it into one combined radar image of all air traffic in the region. The computers would identify and track aircraft, provide real-time direction data, and would allow operators to interface directly between the radars and air defenses such as interceptor aircraft and anti-aircraft missile stations. Crews operating the computer terminals could monitor specific aircraft and issue intercept commands to fighters, and the SAGE computers would transmit precise intercept coordinates directly to the auto-pilot systems aboard the aircraft through the use of Ground Air Transmit Receive (GATR) sites.

The SAGE computers at K. I Sawyer AFB were connected to radars at seven different sites, including Antigo AFS in Wisconsin; Sault Ste Marie AFS near the Soo Locks; Empire AFS in Leelanau County Michigan; the Calumet AFS in the Keweenaw; and Ramore AS, Lowther AS, and Pagwa AS all in Ontario, Canada. The SAGE system was enormously complex and expensive though, and was therefore very short lived. The SAGE Direction Center at K. I. Sawyer was closed down in 1964 after only five years of operation. The radar stations in the Sault Sainte Marie Air Defense Sector were all transferred to other Direction Centers, with the Calumet Air Force Station being transferred to the Duluth Air Defense Sector.

Initially, K. I. Sawyer AFB served as a fighter-interceptor base for air defense against Soviet bombers that might approach the northern US border from across the Arctic Circle. The first aircraft assigned to the base were F-102 Delta Dagger interceptors of the 438th Fighter-Interceptor Squadron, on loan from Kincheloe AFB near the Soo Locks. When the base officially opened in 1959 they would receive their own F-101 Voodoo fighters, under the command of the 56th Fighter Wing. In 1960, Strategic Air Command (SAC) assigned the 923rd Air Refueling Squadron and the 526th Bombardment Squadron to the base, and with them KC-135A tanker aircraft and B-52H Stratofortress strategic bombers. SAC had recently adopted a "dispersal" strategy of scattering their large nuclear bombers across numerous bases so that they couldn't all be destroyed in the event of a Soviet first strike. The 2.3 mile long runway at K. I. Sawyer was specifically designed to support the takeoff and landings of these enormous bombers. The B-52s were kept at full readiness at all times and could be airborne with nuclear weapons at a moment's notice.

In 1969, the F-101s at the base were replaced with newer F-106A Delta Dart interceptors. These would continue to be the primary interceptor aircraft stationed at K. I. Sawyer for over a decade. They were scheduled to be replaced with new F-15 Eagles in 1984, but due to budget cuts the squadron was not given new aircraft and was instead deactivated entirely in 1985. The B-52s and KC-135s would continue to operate out of K. I. Sawyer until the base's closure. Other aircraft stationed at K. I. Sawyer included FB-111 Aardvark medium bombers, T-33 Shooting Star and T-37 Tweet training aircraft, and HH-43B and HH-1H rescue helicopters.
‍

With the end of the Cold War, the United States government began a large scale cost-saving operation to close military installations they deemed no longer necessary. Five rounds of closures were enacted, starting in 1988 and again in 1991, 1993, 1995, and 2005. The Calumet Air Force Station was closed in the first round, and K. I. Sawyer was hit in the third round. The KC-135 tankers and B-52 bombers were transferred to other bases and the base was shuttered. The official inactivation ceremony for the base was June 1, 1995. The runway and some of the buildings were converted back to a civilian airport again, and the remainder of the base was converted to civilian housing and a business park. The closure had a massive economic impact on the surrounding area, with an estimated 14,000 residents leaving and Marquette County losing 20% of its economy.

Today, the K. I. Sawyer Heritage Museum operates out of one former AFB buildings and has several original aircraft on display around the former base. The museum houses numerous original items from the base's history and is definitely worth a visit if you are in the area. Much of the remaining area of the base is still largely abandoned, and as of July 2022 is currently up for auction by MAAS Companies, the same company who auctioned off the Calumet Air Force Station. The auction includes 14 different parcels around the base and numerous buildings such as the original SAGE Direction Center, admin building, dormitories, and hospital. You don't see many opportunities to own huge sections of an Air Force base like this.