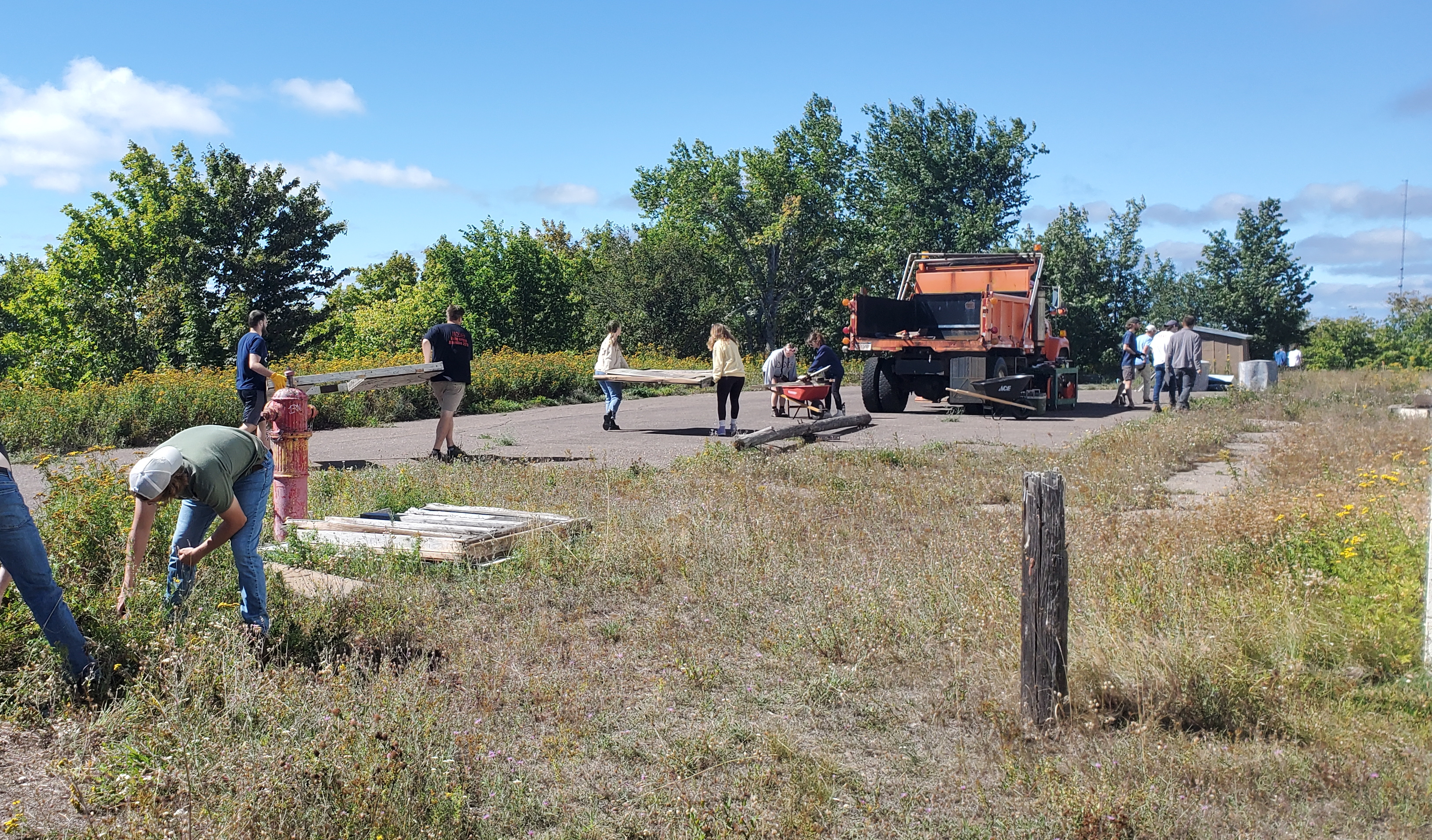 In a previous story about the meaning behind the Open Skies Project name, we mentioned that a major part of our project was the establishment of a non-profit organization that would handle the historical preservation, research, and documentation of the Calumet Air Force Station. One of the purposes of this non-profit will be to establish and operate a historical museum on the property to showcase the history of the radar station and its purpose in the larger context of the Cold War. We are still very much in the early stages of planning for this, but we are currently looking at the very top of Mount Horace Greeley as the possible site for the museum and the focus for a possible historical park. This area, referred to as the Operations Area, was the heart of the Calumet Air Force Station and contained all of the critical equipment for the site. The three original radar towers and the two replacement towers were all up here, along with the powerhouse, telecommunications building, fallout shelter, and the BUIC computer and operations building.

The Operations Building (Building 20) and the Height-Finder Radar Tower (Building 153) are two of the buildings we are eyeing for the start of this project. Both buildings are very unique from both a historical and an architectural perspective, and the Operations Building especially due to its unusual construction. The building started out fairly small and was expanded bit by bit over the years. resulting in a maze of rooms and hallways. In an effort to provide extra protection for the equipment and personnel inside, a reinforced concrete and steel shell was constructed around the entire building, effectively making it a structure within a structure. This only adds to the maze-like interior of the dark, windowless building. We think this would make a great location for the CAFS Heritage Museum! Several large rooms provide ample space for exhibits and displays and there is even a briefing room in the center of the building that could serve as a small movie theater for historical films.

When the radar station closed down in 1988, all of the equipment from the radar towers, phone building, and operations building was removed and hauled off to K. I. Sawyer AFB for reuse or disposal. When the Keweenaw Academy took over the property in the late 90s, they only used a couple of the buildings at the top of the hill and let the rest sit empty. In the time since the Academy closed down the buildings have seen extensive damage from vandals, scrappers, and the weather. Trash and debris from the buildings was scattered across the entire hilltop and the service trenches and walkways were overgrown with trees and brush. Before we could even begin to renovate or reuse these buildings, a massive cleanup effort would be necessary.

On September 3, 2022 a group of about 40 volunteers from Michigan Tech's Beta Sigma Theta fraternity and Delta Phi Epsilon sorority joined us at the radar station to help clean up the debris and garbage scattered around the Operations Area. The volunteers split into several different teams and set about clearing brush and picking up the huge amounts of debris around the buildings. Scrap lumber and metal were sorted into piles and hauled down the hill for reuse or disposal. Two other teams started cleaning out the telecom building and the storage building next to the radar tower. Another team hauled away the broken remains of the fire hydrant sheds. From there, we worked our way towards the old concrete tower foundation, picking up all of the garbage that had been thrown down the hillside over the years. A group of volunteers even cleared out all of the debris and overgrowth that had accumulated in the foundation itself, making several large piles to haul away to our dumpster. They also managed to find all four of the missing railings off of the radar tower, along with several brackets that likely went to one of the antennas on the tower. They even found a vintage General Electric sign in the telecom building, which we managed to save for the museum.

In less than three hours, the members of Beta Sigma Theta and Delta Phi Epsilon had managed to clean virtually the entire top of Mount Horace Greeley along with the interiors of two buildings, one of the tower foundations, and an entire side of the hill. They worked incredibly hard with smiles on their faces the entire time. We cannot express how grateful we are to everyone who showed up to help and all of the hard work they put in. We owe a special thanks to Jake McDowell of Beta Sigma Theta and the Interfraternity Council who reached out to us about this and made it all possible!

If you have a group that would like to volunteer at the Calumet Air Force Station, please reach out to us through our contact page and let us know! There are still a lot of things we would like to get done before the snow falls. We will likely be planning another large event for Spring 2023 as well, so there are going to be plenty of opportunities to volunteer and help out!